The Great Barrier Reef is one of the world’s natural wonders and an outstanding component of the world’s natural heritage. A visit to its coral gardens, with their multitudes of weird, wonderful and colourful inhabitants, is an inspirational experience. I have seen nothing to compare with the vibrancy of a healthy tropical reef 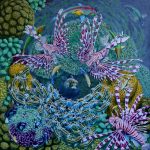 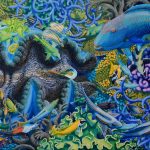 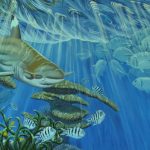 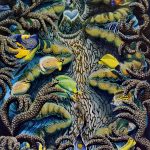 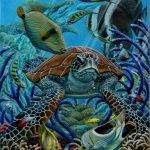 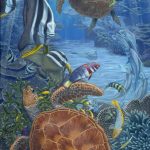 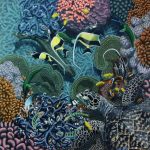 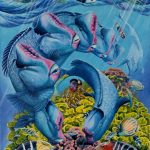 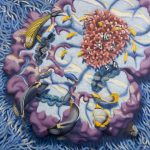 The corals take on a profusion of forms and hues, amongst which brightly coloured and intricately patterned fish hover tantalisingly just out of reach. Vast schools envelop you as they pass by. A turtle may slowly go about its business, and occasionally a patrolling shark may get your heart racing, particularly if it seems to be circling you. You may also be awed as one of the giants, such as a Manta Ray, idly glides past. On every visit some new treasure waits to be discovered.
Sadly, so, so sadly, our tropical reefs are dying before my eyes. It is an indictment of our generation that soon my paintings and other images may be all that is left to evoke memories of what the Great Barrier Reef used to be like.
I hope that my paintings may help you better see and appreciate our coral reefs as one of the world’s truly outstanding natural wonders, and maybe inspire you to help give them a future. They are fast running out of time.
The massive coral development that characterises today’s reef may not have started until less than 500,000 years ago. Since then sea-levels have varied widely as ice ages have come and gone, with sea-levels being 113m lower than now at the height of the last ice age 18000 years ago, when the coast was near the edge of the continental shelf. The reef has thus had to shift in response to both coastlines and water depths, with most modern reefs dating back about 9,000 years, to before “The Great Standstill” when sea-levels stabilised some 6,500 years ago.
Coral reefs are now under dire threat. There have been five occasions in the earth’s history where the environment has gone berserk resulting in mass extinction events, with the last one causing the extinction of dinosaurs some 65 million years ago. Around that time atmospheric levels of CO2 reached extreme levels, the oceans acidified, sea-levels fluctuated widely and cyclonic storms became rampant. Most corals disappeared.
We are now initiating the sixth great mass extinction, a process that will soon become irreversible if we continue on our present course. While some say it is already too late, other say we have less than a decade to change our ways and avert the worst.
The Great Barrier Reef is formed by corals which have a symbiotic relationship with algae. The algae convert sunlight into food. Though when water temperatures get too high the algae produce toxic amounts of oxygen are so are expelled by the corals which then start to die. When the waters cool again some corals can take back the algae and slowly recover. If it happens too frequently or lasts too long even the hardy corals die.
Up until 2016 there had been a 50 per cent decline in coral cover on the Great Barrier Reef over 27 years due to cyclone damage, crown-of-thorns starfish and bleaching. There were major bleaching events due to warmer waters in 1998 and 2002 where over half the reefs were affected, with only 5% dying overall, but mortalities as high as 70-80% on some reefs. The 2016 coral bleaching event was the worst on record, with 81% of the reefs north of Port Douglas affected and 35% of the corals subsequently dying. The loss of the corals has also affected the fish that rely upon them. Such events are becoming more frequent, and will become annual events by 2030 on current trends.
When the coral dies, the entire ecosystem is changed. First the invertebrates and fish that rely upon it for feeding and shelter die or move away, then the predatory fish and seabirds follow. The impacts ripple out as each component of the reef is lost.
Though it is not only the water warming due to climate change that is increasingly threatening our oceans. They are absorbing around half of our carbon emissions and this is making them more acidic. The consequence of this is that it becomes harder for many species to extract calcium carbonate from seawater to make their skeletons.
In the southern oceans phytoplankton are already being affected, which in turn affects the krill which feed upon them, and the whales that feed upon them. Since 1990 the growth rate of corals on the Great Barrier Reef has been reduced by 14%. By the middle of this century it will become impossible for many marine organisms to make their skeletons or shells, and thereafter they, along with what’s left of the Great Barrier Reef, will begin to dissolve.
We are rapidly running out of time to change our ways if we want to give our magnificent tropical reefs, from the Great Barrier Reef around to Ningaloo, a future.