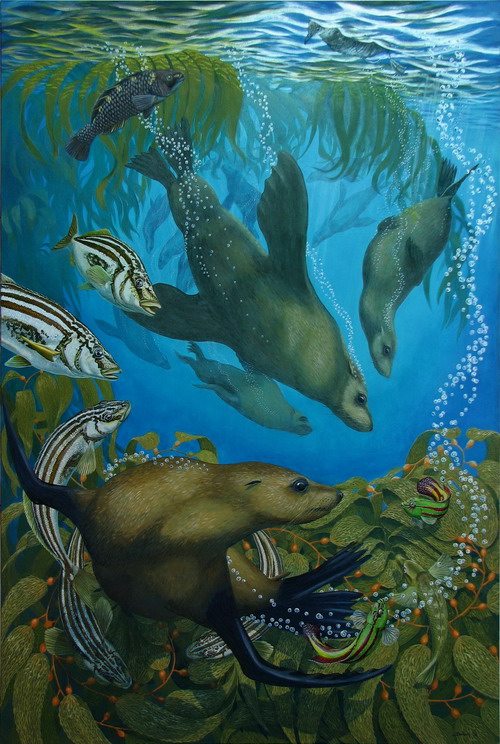 In our cooler waters red, brown and green seaweeds of a multitude of sizes and shapes colonise rocky outcrops, forming dense gardens that sway back and forth with the waves. In many places red alga encrust on the rock, being glimpsed beneath the oscillating seaweeds. These seaweed glades have their own inherent beauty that can be as captivating as a coral reef.  Though the fish can be harder to see as they may disappear amongst the fronds. 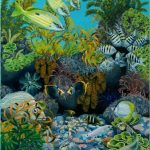 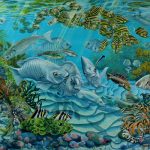 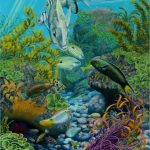 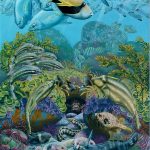 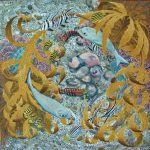 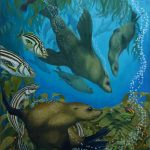 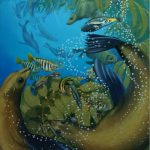 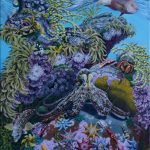 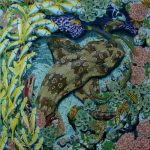 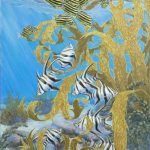 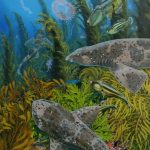 They achieve their grandest expression with the giant kelp forests of our coolest waters, where the kelp can grow more than 50 mm a day, up to 2 metres a year, forming forests up to 30m tall, stretching from the seabed to the surface.

Swimming amongst a seal colony is an unforgettable experience as they charge at you, rapidly circle around you, and sometimes even jump over you. They are friendly and inquisitive. It is like being surrounded by a pack of playful puppies,

My paintings focus on Tasmania’s threatened kelp forests (Kelpies I, Kelpies II, Swell Sharks), and the warmer waters of the Cape Byron Marine Park that I have been trying to have protected from fishing (Cape Byron I, Resting Wobbegong, Stripey Old Wifes, The Bream Hole I-IV, Octopus’ Garden).

To our shame our temperate kelp forests are being dramatically affected by climate change, particularly as the East Australian Current has moved around 350 km further south in the past 60 years, with waters off eastern Tasmania warming at three times the global average. The kelp can’t cope with the warming waters. To add to its woes, fishing is removing rock lobsters and other predators of the sea-urchins which feed on kelp, allowing them to create expanding ‘urchin barrens’ devoid of kelp.

Two-thirds of the kelp forests along the east coast of Tasmania have disappeared in the past 50 years, with over 90% lost in some places The Giant Kelp Marine Forests of South East Australia are now listed as nationally Endangered.

It is the cooler waters that are also at the vanguard of acidification due to atmospheric carbon dioxide being absorbed and turned into carbolic acid. This is making it increasingly hard for many species to make their calcium carbonate shells and skeletons.  If we don’t take urgent action, soon it will be so acidic that the surviving seashells will begin to dissolve.