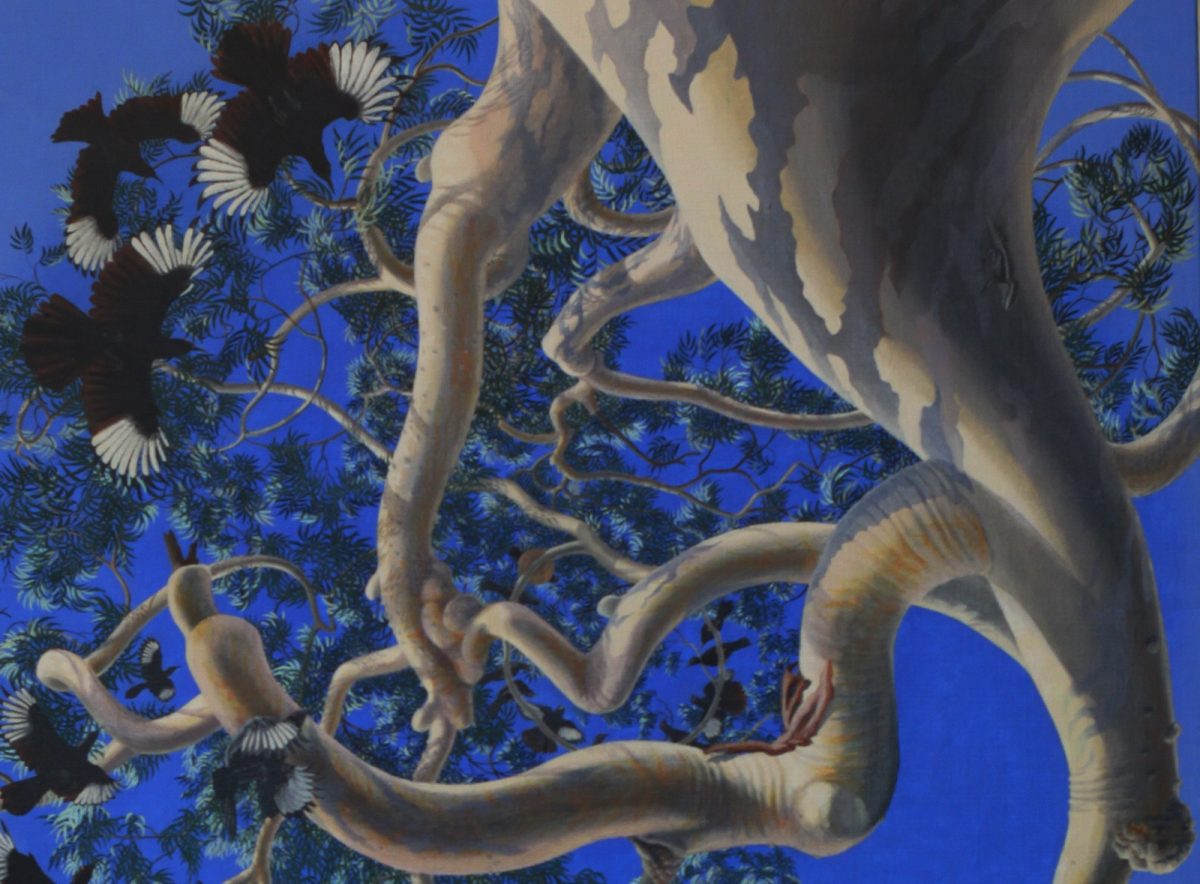 This series of works comprise a number of gouaches that I completed on my journeys around Australia, as well as a series of oil paintings I completed from selected sketches and photos taken on purposeful exploration of red gums along our inland rivers. On my journeys I observed numerous magnificent, majestic, weird and wonderful trees, though I was shocked and saddened by the multitude of sick, dying and dead trees I encountered. 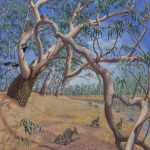 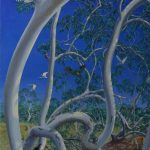 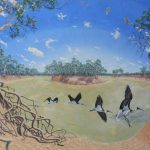 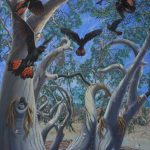 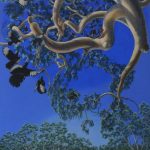 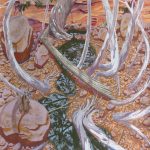 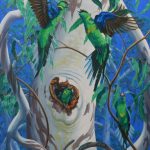 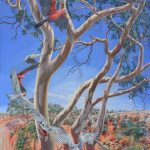 These include the ephemeral tributaries of the ephemeral Bulloo Lakes (Buried Alive, Looking around Idalia Rockhole). The infamous Coopers Creek where it flows into Coongie Lakes (Raucous Welcome). The ancient Finke River, one of the oldest rivers in the world (Finke River). The Paroo River, the only remaining free river that occasionally feeds into the Darling River (Meandering Anabranch). The much abused and ailing Darling River (My Darling Blacks, On the Brink, ) and the still mighty Murray River (Save the Murray River Red Gums).

River Red Gums (Eucalyptus camaldulensis) deserve their reputation as an Australian icon and an integral part of our national identity.  They are extensions from our forests,  delineating the continent’s water arteries into our arid heartland.  They provide essential homes, roosts and foods for a plethora of species. Their dappled shade provides a place to rest and contemplate in an arid landscape.

Their smooth white trunks and writhing branches vividly contrast with the orange desert and cobalt blue inland skies.  Their beauty is accentuated by the mauve patterns of shedding bark, the orange stains deposited by desert dusts, and the dark gnarled slabs of bark protecting their bases.

River Red Gums live on creek and river banks, moving out onto regularly inundated floodplains. They are heavy water users, depending upon river flows and buried streams for their survival in low rainfall areas. They are integral components of inland hydrological regimes.

The lucky few may live for over a 1,000 years.  As they age they develop hollows in their trunks and branches, which are utilised by many animals as dens and nests, including by parrots, cockatoos, owls, tree martins, kingfishers, treecreepers, wood ducks, possums, gliders and bats.  It is not until trees are around a hundred years old that they begin to develop small hollows, and not until they are over 200 years old before they start to develop the large hollows required by larger species, such as cockatoos.

Some species use a variety of hollows throughout their home ranges, and actively exclude others from using them.  Some are more egalitarian, with many hollows in a single tree occupied by separate couples and sometimes a variety of species.  Some reside in their hollows, others use them only for nesting, though many use the same hollow year after year.  A single hollow may also be used by a succession of species throughout a year.

When branches or whole trees crash to the ground they continue to be utilised as homes by a variety of species.  Even when they fall into the rivers some native fish, most notably the majestic Murray Cod, need their hollows for shelter and egg laying.

Many birds simply roost or nest in their spreading branches.  The older Red Gums produce abundant nectar and copious seeds, while an abundance of insects scavenge amongst their leaves and over their trunks, together providing sustenance for the multitudes.

Due to increased soil moisture and nutrients, along with associated drinking water, riparian vegetation is particularly important for wildlife within landscapes.  As the Red Gums follow the watercourses out into more arid or cleared landscapes their importance for maintaining regional fauna populations rapidly escalates.

There is a major problem, recruitment of young trees into the population is being significantly impeded by cattle and sheep grazing over vast areas of country.  As the hollow-bearing trees die, they are not being replaced.  Given that it takes a tree 100 to 200 years to develop useful hollows, the housing supply deficit is rapidly becoming a crisis.  In many areas competition for the remaining hollows is becoming a life or death struggle.

If this unfolding catastrophe wasn’t bad enough, dams have changed seasonal flooding regimes, river flows are overcommitted to irrigators, and trees are being felled for firewood.  Climate change is compounding Red Gum’s problems as rainfall is declining and evaporation is increasing, dramatically reducing the catchment surplus that constitutes river flows.

Vast areas of Red Gums are dead or dying – spreading like a cancer upstream from the mouth of the Murray River and erupting throughout catchments where the stresses are greatest.  They are dying in their millions.  Red Gums – and their inhabitants – are in retreat to the refuges that may be able to withstand our unfolding climatic catastrophe.

To reduce the rate of decline and minimise future loses, it is essential to stop cutting down the surviving Red Gums (mostly for firewood), provide them with better regeneration opportunities, and stop stealing so much of their water.